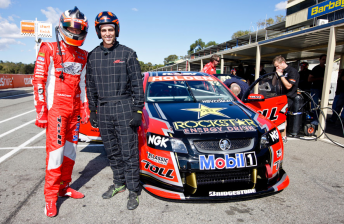 As part of the factory Holden team’s ride days at the West Australian track, Johnson held on for his life as Tander took him for a hot lap.

The 29 year old pace man was overawed by the experience.

“What can you say – it was just unbelievable,” Johnson said.

“Garth even let me change gears on the long back straight; I stuffed up the first one, but got it right the second time and we picked up some speed!”

“I’m rapt Mitchell enjoyed the ride but I’ve politely declined his invitation to face a few balls,” he said.

“I’m not going to stand there and let him bowl at me, no way!”