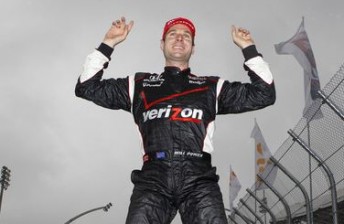 Will Power is looking forward to this month’s Indianapolis 500, the first oval race of the 2011 Izod IndyCar Series season, after scoring the win and the championship lead in Brazil.

The Team Penske driver has taken all four pole positions on offer so far, and now holds a 14 point lead over reigning champion Dario Franchitti.

“That was an awesome race, there were so many different track conditions,” said Power after winning in Brazil.

“I’m really happy to get the Verizon car back in victory lane again.

“We’ve been on pole four times and had two wins, so it’s a great start.

“The 12 team is really hooked up. It’s our second year together, so we’re just more relaxed about it, enjoying it, and just going a weekend at a time, not really thinking of the whole picture.”

Yet to win an oval race in his career, Power said he feels confident heading into the next phase of the season, which will take competitors to the ovals at Indianapolis, Texas, Milwaukee and Iowa.

“In the last two year’s we’ve been in a position to challenge for the win at Indy, so I think that we’re going to be really fast,” he said.

“I’m really looking forward to the ovals, I really am. I’ve been thinking about it a lot and I can’t wait to get on them.”