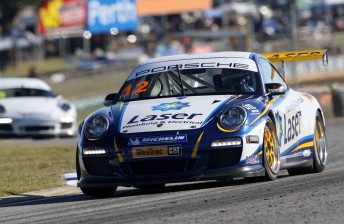 Porsche Cars Australia will not send an Australian entry to the Carrera World Cup at Germany’s legendary Nurburgring circuit.

The World Cup race, a support class for the classic ADAC Nurburgring 24 hour on June 25, will see the best of the world’s Porsche drivers compete, made up of as many as 150 entries.

Porsche Australia’s motorsport boss Jamey Blaikie says that budget constraints during the return season of Carrera Cup in Australia doesn’t allow for a local driver to be sent to Germany to represent.

“It is something we would very much like to do, but there is no budget for Australian Carrera Cup to send one or more representatives to the Carrera World Cup,” Blaikie told Speedcafe.com.

“The concept of the Carrera World Cup is fantastic and I believe organisers are expecting over 150 GT3 Cup entries.

“Being so far away from Germany makes it an extremely costly exercise and unfortunately we just don’t have the funds to send a team across.”