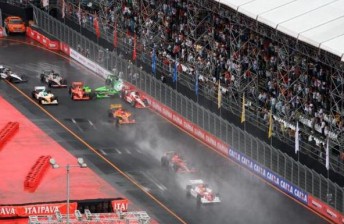 The Sao Paulo Indy 300 will be run a day later than scheduled, after heavy rain forced the Sunday afternoon event to be postponed.

The race got underway as planned in wet conditions, before a further downpour brought out the red flags on Lap 9.

A red flag lasting almost two and a half hours followed (in which teams were allowed to work on their cars), before competitors returned to the track in the hope of a restart.

The track was subsequently deemed to have too much standings water to allow racing to resume, with the race being postponed until 9:05am (local time) Monday morning.

“It’s disappointing to have to postpone any event, but especially one that we anticipated to be such a great event,” said Brian Barnhart, president of competition and racing operations for IndyCar.

“The city of São Paulo did an outstanding job on improving a circuit that produced 96 passes for position a year ago and had a lot of on-track action, but ultimately it came down to a visibility issue and safety for our competitors is a priority.

“We thank the city and state of São Paulo, the event promoter and track workers for their efforts to dry the track. Hopefully, the great racing fans in Brazil who came will come back (May 2) and fill the grandstands for the great event they came to see.”

The wet conditions ensured carnage in the green flag laps that were completed.

Front-row starter Ryan Hunter-Reay commenced proceedings by heading straight into the tyre barriers at the first corner, while contact between Dario Franchitti and Helio Castroneves also saw Simona de Silvestro, Danica Patrick and Tony Kanaan all fail to make it through the first chicane unscathed.

With Mike Conway dropping from third to 20th thanks to electrical problems while under the Safety Car, today’s restart will see Will Power lead fellow Australian Ryan Briscoe, Takuma Sato, Rahal and Franchitti.