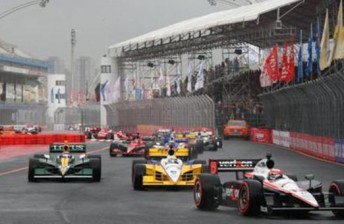 Will Power drove through the spray to win in Brazil

Will Power has taken a fine victory in the rain-delayed Sao Paulo Indy 300.

Having led when the red flag was called after 15 laps on Sunday, Power controlled the restart, before leading the field down pit road for wet tyres at the end of the lap as rain began to fall.

The first caution was soon called for the stranded cars of Ryan Hunter-Reay and Sebastien Bourdais, allowing an aggresive Takuma Sato to pass Power on the double-file restart.

Championship leader Dario Franchitti found the tyre barriers at Turn 1 on Lap 33, but kept his engine running and rejoined, only for the full-course yellow to appear for a spun Alex Tagliani a lap later.

The yellow led to the race’s defining moment, with Sato, Marco Andretti (running third) and EJ Viso (running fifth) among those choosing not to pit, while the other top-six runners, Power, Servia and Briscoe, led a group of cars into the lane.

With Power restarting eighth, Viso made it a KV Lotus one-two by passing Andretti for second shortly after the race resumed. It was not to last for Viso however, as the Venezuelan was black flagged for blocking five laps later.

Andretti made his pitstop just inside fifteen minutes remaining, and took an ambitious gamble for slicks. The American did well not to wall the car, and eventually slid his way to 14th.

Sato abandoned his futile fuel strategy and pitted with less than 10 minutes remaining, handing the lead to Power, who had calmly made his way by Dario Franchitti, Graham Rahal and Sebastian Saavedra since the last restart.

Winner last time out at Long Beach, Mike Conway took sixth at the flag, from Justin Wilson, who was one of many to endure a spin during the race, and Sato.

Rookies James Hinchcliffe, JR Hildebrand and Saavedra filled ninth through 11th, while Scott Dixon led home Viso and Andretti in 12th – the Chip Ganassi driver having brought out the caution with a Turn 2 spin on Lap 38.

Power has now won two of the season’s opening four races, and holds a 14 point lead over Franchitti in the championship standings.

See below for the full championship standings