Big entry for Rally of Queensland

Big entry for Rally of Queensland 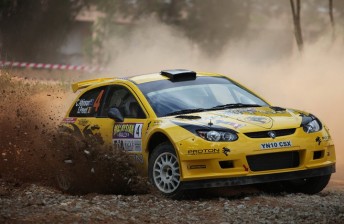 A record entry of 96 cars, including 16 from overseas, is set to make the International Rally of Queensland on the Sunshine Coast on 13-15 May, making it one of the biggest championship rally spectacles in Australia for many years.

Cars and drivers representing 10 countries, from Australia to Britain and China, will tackle two days and two nights of special-stage competition between Caloundra, 100 kilometres north of Brisbane, and the Mary Valley forests in the Gympie-Cooloola region.

The International Rally of Queensland field is the biggest in the 43-year history of the event as a championship round; overseas entries are double last year’s number. It will be increased further by the inclusion of a motorcycle class for the first time.

“This is one of the biggest fields at an Australian championship rally event in recent memory,” said Event Director Errol Bailey.

“With so many cars passing spectators twice each night and twice each day and no more than two minutes apart, it will be non-stop action.

“Spectators will see some of the fastest rally drivers from around the world and the best cars, like the works Proton Satria Neo S2000s from Malaysia and Group N Mitsubishi Evolutions run by teams from Japan, Australia, China, India and Indonesia.

”At the other end of the field the Classic Escorts, Porsches and Datsuns will be spectacular and the Forest Motos will add a great new experience.”

Mr Bailey said the big entry list demonstrated a strong following for rallying in Australia and the Asia Pacific region and would bring widespread attention to the Sunshine Coast and Gympie-Cooloola regions.

“A field this size will mean more than 2000 team members, supporters, media and officials visiting for up to a week. Those from outside Queensland make no secret that the Sunshine Coast’s warm autumn weather, scenery, tourist attractions and facilities and the welcome, as well as a cracking competition, are all reasons they enter the International Rally of Queensland,” he said.

“The unprecedented number of overseas entries will ensure widespread media coverage and bigger audiences for our dedicated national and international television broadcasts.”

Discounted tickets are on sale at www.rallyqueensland.com.au for viewing at the Caloundra Rally Shootout, presented by Caloundra RSL and Hella, and the Hella Spectator Park at Imbil.

An all-venue adult Event Super Pass costs $35 for purchase on-line before 9 May or $50 at the gate. Tickets to the Party Deck corporate hospitality suite at the Caloundra Rally Shoot are $135.