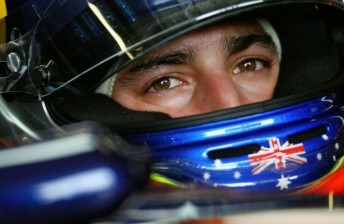 Daniel Ricciardo will start his first Formula Renault 3.5 Series race of 2011 from sixth position after an incident ended his qualifying session early.

The Australian lost control of his ISR entry at Spa’s infamous Eau Rouge corner with seven minutes remaining in the session, spinning into the barriers.

The Red Bull-backed driver sat second on the time sheets prior to the incident, but had his fastest time removed courtesy of bringing out the red flag.

Ricciardo’s ISR team is confident that the West Australian can win tomorrow’s opening race of the weekend regardless.

“Unfortunately, there is some damage,” ISR engineer Peter Berry has been quoted as saying by autosport.com.

“He was straight out of the pitlane on new tyres and took Eau Rouge flat.

“When it happened I was really worried as someone from another team said the damage was really bad. But actually it could have been far worse.

“There is some damage to the crash box but we can repair it and thankfully the gearbox is fine. We can still win from sixth.”