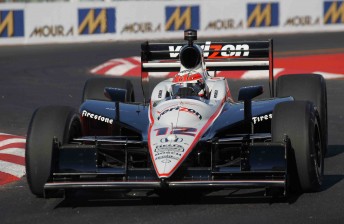 Will Power his taken his fourth-consecutive pole award of the season and gave Penske Racing its 200th Indy car pole for the São Paulo Indy 300.

Like at Long Beach two weeks earlier, Ryan Hunter-Reay will join Power on the front row. They finished one-two in the IZOD IndyCar Series race in Brazil, with Power starting the 2010 season with the victory.

“What a fantastic job they did repaving the track, and I believe it now sets the standard for street courses,” Power said.

“The second session for us was a little tight – I was P5 with one lap to go – and I put a lap together at the end to advance. In the Fast Six we were very comfortable and gave it everything we had.”

Scott Dixon and Ryan Briscoe will share Row 2, while Graham Rahal and Dario Franchitti will be on the third row for the 75-lap race.