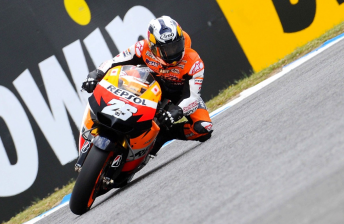 Pedrosa stalked his Spanish countryman for the majority of the race, before pulling the winning passing move on the front-straight with just four laps remaining.

Still recovering from shoulder surgery, Pedrosa was visibly in pain after the race.

Casey Stoner took a distant third, while Andrea Dovisioso made it three Repsol Hondas in the top four by edging Valentino Rossi’s Ducati at the finish line.

Front-row starter Marco Simoncelli walked away from a major high-side on the opening lap – completing an unwanted trifecta for the Italian, having also crashed in practice and qualifying.

Hector Barbera joined Simoncelli on the pavement at Turn 4 – his first race crash since debuting in the premier class at the beginning of last season.

Karel Abraham was another to crash out – falling on Lap 2.

Pedrosa has now closed to within four points of Lorenzo in the title standings, with Stoner holding down third.

CLICK HERE for the full championship points after three races