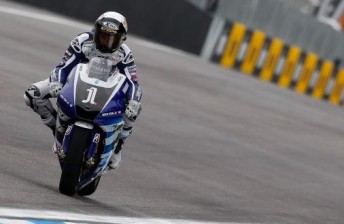 Lorenzo swept to a surprise pole in Estoril

Just moments after his time was eclipsed, Simoncelli crashed at Turn 7 – the Italian escaping uninjured after losing the front-end of his Gresini Honda in the fast down-hill right-hander.

Stoner had set the fastest time to the end of the third sector on his final tour, but failed to improve from fourth.

Simoncelli, who crashed out of the lead in the most recent MotoGP race in Jerez as well as falling during yesterday’s practice, says he’s confident for the race, despite his mistake today.

“For all of the practice here I was so fast, and also for the rhythm I’m fast, and so I”m confident for tomorrow,” he said.

“I”m disappointed for the crash, because after the first part of the practice today I thought it could be possible to do the pole position.

“But it is most important to have the rhythm for tomorrow, which i have, so I am ok.”

The qualifying session was run in dry conditions, despite morning showers at the venue. More rain is expected for the race.