Jonny Reid back on top in Carrera Cup

Jonny Reid back on top in Carrera Cup 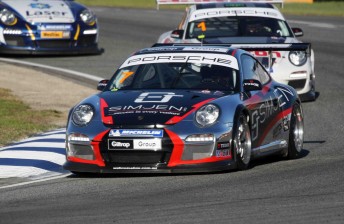 Jonny Reid has taken his second Carrera Cup race win in as many rounds at Barbagallo Raceway today.

The Kiwi started on the front row and gained the lead into the first corner. He remained in the lead for the duration of the race finished ahead of reigning champion Craig Baird and yesterday’s race one winner Steven Richards.

Reid’s victory follows his maiden race win for the season at the Australian Grand Prix in the category’s opening 2011 race.

Local driver Michael Patrizi finished a close fourth, while Ben Barker charged through from 13th to claim fifth by the finish ahead of Matt Coleman, Daniel Gaunt and Elite Class leader Max Twigg.