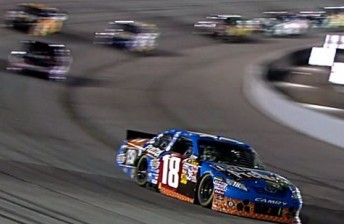 For the third year in a row, Kyle Busch has won the Spring race at Richmond International Raceway.

Busch and Hamlin were both told to save fuel in the closing stages, with the race winnner eventually running out on his way to Victory Lane after completing his post-race victory burnout.

The biggest crash of the night came on Lap 300, when a multi-car accident took a highly competitive Jeff Gordon out of the race.

Gordon had been shuffled back into the pack on tyre strategy, and was clipped by Matt Kenseth on the backstretch, as the Roush Ford driver ran three-wide with Clint Bowyer and Paul Menard.

Gordon made heavy contact with the inside wall, but escaped uninjured.

Team-mate Jimmie Johnson also had tough night, but rallied for an eighth place finish, despite a mid-race incident with Joey Logano. 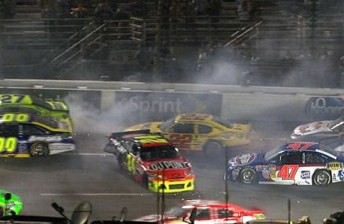 Martin Truex Jnr was the hard-luck story at Richmond. The Michael Waltrip Racing Toyota challenged its Gibbs rivals in the middle of the race, but was eventually classified 27th, three laps down, after pitting with a loose wheel with 25 laps to go.

Pole-sitter Juan Pablo Montoya had his chances erased early – the Target Chevrolet squeezed into the outside wall exiting Turn 2 by Ryan Newman.

Montoya later received a warning from NASCAR officials, after the former Formula One driver returned to the track and shunted Newman into the fence at Turn 3.