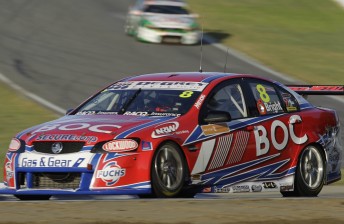 Jason Bright has taken his first V8 Supercars victory in since 2006, winning Race 8 of the V8 Supercars Championship at Barbagallo Raceway.

After a delayed start due to the start-line incident Karl Reindler and Steve Owen, Bright romped away to the win ahead of TeamVodafone’s Jamie Whincup and Bright’s team-mate Brad Jones Racing.

The result made for an up and down race for Brad Jones Racing, who have scored a double podium and a car that is most likely destroyed (Reindler).

The last time Bright won a V8 Supercars race was in 2006 at Bahrain.

See below for footage of the incident …