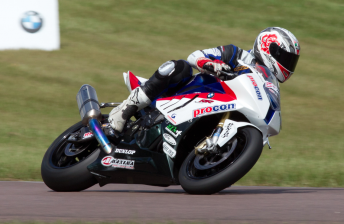 Glenn Allerton’s pursuit of a second QBE Insurance Australian Superbike Championship crown was on show today with the Procon Maxima BMW rider wrapped up Race 2 and the overall round at Perth’s Barbagallo Raceway.

The Sydneysider’s form from a calculated Race 1 victory continued, though he didn’t have it all his own way as a number of other riders showed their intention to challenge.

Honda’s Craig Coxhell made a great start and challenged early before relinquishing the lead to a storming Allerton.

After winning both races for the weekend, Allerton was on top of the world.

“This weekend has been an awesome one for the team and it’s great to come back to Perth and show the strengths of the BMW to such a big crowd,” said Allerton.

“We knew that everyone would be searching for more grip after yesterday’s race so got together and made some changes to the bike to make it a bit better.

“Over race distance it came on strong again and was super quick. I can’t thank the team enough for putting everything they have behind me.”

The next round of the QBE Insurance Australian Superbike Championships will be held at Queensland Raceway from June 3-5.