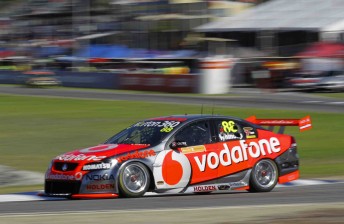 Jamie Whincup has taken pole position for Race 7 of the V8 Supercars Championship at Barbagallo Raceway.

The TeamVodafone driver edged out Will Davison (Trading Post Racing), who will join the Championship leader on the front-row.

Craig Lowndes (TeamVodafone), Steve Johnson (Jim Beam Racing) and Rick Kelly (Jack Daniel’s Racing) round out the top five, while the standout of the 20 minute session was Karl Reindler. The home-town driver Karl Reinder stunned the V8 fraternity by taking sixth place, having held onto second until the dying stages of the session.

Reinder’s best qualifying performance this year was 22nd position in Abu Dhabi, while his previous career-best qualifying was at Homebush last year where he took 19th place.

While it was glory for one West Australian, the other two struggled. Garth Tander (Toll Holden Racing Team) and Dean Fiore (Triple F Racing) will start a lowly 23rd and 24th respectively.

Race 7 of the V8 Supercars Championship will be held at 2.05pm this afternoon.