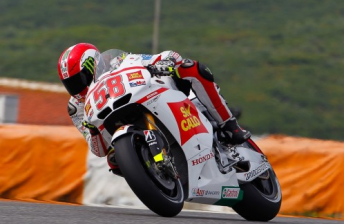 Simoncelli emerged fastest from both practice sessions in Estoril

Italian wild-man Marco Simoncelli has topped Friday practice for the Portuguese Grand Prix, despite crashing during the afternoon’s second session.

The Gresini Honda rider missed just a few minutes of the session due to the fall, and went on to back up his fastest time from Practice 1 by edging Jorge Lorenzo (Yamaha) by 0.06s.

Dani Pedrosa, still recovering from a collarbone injury, was the fastest of the factory Repsol Honda riders in third – just 0.003s shy of Lorenzo.

Alvaro Bautista returned to action today for Suzuki, having broken his leg just 41 days ago during practice for the season opener in Qatar. The Spaniard finished the day at the foot of the time sheets.