Miedecke holds off Bullas in Race 1

Miedecke holds off Bullas in Race 1 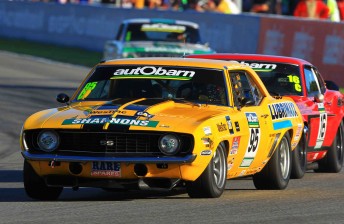 Round 2 of the Touring Car Masters Series has kicked off with a victory for Andrew Miedecke in his Camaro at Barbagallo Raceway today.

Miedecke, in his Whiteline Racing machine,e was forced to defend heavily against Gavin Bullas, with the two enjoying a spirited, fair fight.

Miedecke held him off ahead of Jim Richards in third ahead of John Bowe, Brad Tilley, Cameron Tilley, Bill Pye and Tony Edwards.

Pole-sitter Bowe made a mess of the start and was almost collected by a number of rivals. The two-time Bathurst winner recovered to finish four after dropping as low as 19th.

The Touring Car Masters will hit the track again tomorrow with a reverse grid Race 2 from 12 noon and the final race of the weekend from 4:10pm.