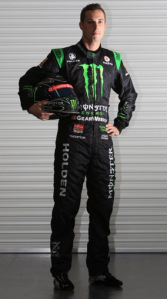 The Monster Energy Drinks-backed Holden Commodore topped the time sheets used a set of green (New) tyres to set the time of 57.3614s ahead of Scott McLaughlin and Paul Morris, who had earlier rolled his Commodore.

Thompson was pleased with his progress through the day.

“We worked away trying to find a good balance at the start which I think we achieved by the end.

“Our time was cut short in the final practice session with the red flag and Paul Morris rolling his car so when the crew put green tyres on we probably didn’t maximise that final lap because of the time constraints we were under.  “All-in-all I think we worked well to find a good qualifying car but the main focus was on the race car.”

Stone Brothers Racing youngster Scott McLaughlin was second ahead of Morris and Nick Percat, who was the best of the drivers not to use green rubber.

The Fujitsu V8 Series will have its qualifying at 12.30pm tomorrow of the opening race at 4.40pm.