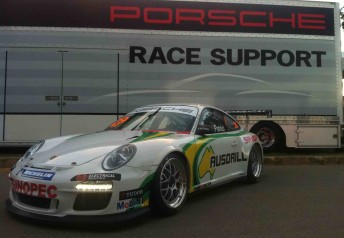 Michael Patrizi has unveiled his backer for the 2011 Porsche Carrera Cup.

The West Australian driver confirmed that long-time supporter Ausdrill will be his major sponsor for the rest of the year.

The mining company has backed Patrizi since 2008 and will be seen on the doors of his 911 GT3 Cup Car.

“Ausdrill have been a big supporters of mine over the past five years,” Patrizi told Speedcafe.com.

“They’ve been with me every step of the way, both in Europe and Australia. They are a terrific company.

“They’re probably one of the biggest companies to be in involved in Australian motorsport. They’ve got 10 subsidiary companies under them, and they’re from Perth, like most big companies in Australia.

“I’m happy to be a part of it, and certainly happy to be launching my involvement with them back here in WA.”

After a mixed opening round at Albert Park where he was involved in a large accident, Patrizi is looking forward to his home race this weekend.

“Like we said before, the car is better than it was when we got it from Germany,” Patrizi said of the repair.

“The guys at McElrea Racing have done an awesome job, and from here, we just have to push on. We don’t come here to be second, but we need to be smart and we need good points.”