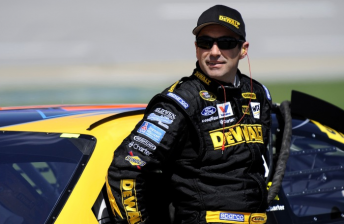 Marcos Ambrose has no spare weekends for the next 30 weeks after committing to a Late Model race in Canada in July.

The Tasmanian NASCAR star will compete in the Super Late Model IWK 250 at Riverside International Speedway on July 23.

That weekend was his only remaining non-NASCAR racing weekend before the season finale at Homestead-Miami Speedway on November 30.

Ambrose is looking forward to the challenge of returning to race in Canada, in this his second start in the event.

“We had a car good enough to win last year, but we had a motor lay over with around 100 laps to go,” Ambrose said.

“We had heaps of speed so if everything hangs together, and I keep my head screwed on straight, we should be close to the front all night.

“The atmosphere is incredible. I was impressed with the huge crowd, the competition, and the other racers, the great facilities, and the awesome oval.

“I’m really glad to be going back this year.”

Ambrose’s car in the IWK 250 will be fielded by Nova Racing, as a teammate to Donald Chisholm and George Koszkulics. The car’s sponsors will be revealed in the near future.

Before he heads to Canada, Ambrose’s next assignment in NASCAR land will be at Richmond this weekend.