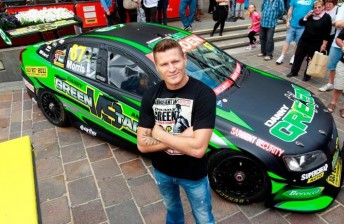 Paul Morris Motorsport has revealed the one-off Danny Green livery that Morris will compete with in this weekend’s Fujitsu V8 Supercars Series round at Barbagallo Raceway.

As part of a unique partnership, Morris’s new look promotes the upcoming ‘Green v Tarner’ fight, while Green himself will get behind the wheel of the Commodore tomorrow for a handful of promotional laps.

The Barbagallo event will mark Morris’s first competitive V8 Supercars outing for the season, after missing the Fujitsu opener in Adelaide last month.

A 24-car field is set to tackle the West Australian circuit, with Triple Eight Race Engineering’s Andrew Thompson and Walkinshaw Racing’s Nick Percat among the favourites for victory.