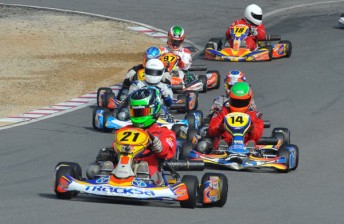 Cian Fothergill on his way to victory in Clubman Light at the weekend. Pic: AF Images

Reigning CIK Stars of Karting Series Champion Cian Fothergill was the star of the show at the 49th National Sprint Kart Championships at the Cockburn International Raceway in Western Australia at the weekend.

Fothergill was the only driver to claim multiple victories winning both the highly competitive Clubman Light and the Leopard Light classes in style.

“I haven’t ever had results like this before so it’s a bit different, I haven’t got quite used to the whole idea yet but I have to really thank everyone involved at the Tracksa Team, Remo Racing and Kosmic Karts and Andrew Scott for crewing for me all weekend, without all of their support none of this would be possible.”

After qualifying fastest in the Clubman class Fothergill took out the opening heat, finished third in heat two and second in the pre-final to start on the outside front row of the 15-lap final.

The Queenslander was shuffled back to sixth at the start of the final while pole-sitter Tyler Greenbury led the way for the opening six laps however this was when the race really began to heat up.

Waters reclaimed the lead on the penultimate lap and looked set for the victory but in trying to defend his position he ran wide with two corners remaining allowing Fothergill through to greet the chequers first over James Sera and Waters who recovered for third.

It was a more dominant performance from Fothergill in the Leopard Light class, again setting the fastest time in qualifying and winning every race apart from the opening heat. 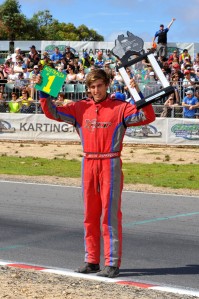 Pressured all the way by local driver Amrit Kandola and three-time Australian champion James Sera, Fothergill led all the way to claim his second victory.

“I just put my head down and the kart just kept getting better and better so I was actually enjoying this one (the Leopard win) a bit more than the Clubman race, the kart was just getting quicker and quicker and was really good to drive,” said Fothergill.

The were two other winners from WA with Kip Foster a popular victory over outgoing Champion Shayne Piper in Clubman Heavy. The victory is Foster’s fifth at the prestigious event. Stuart Verco, who recently returned to the sport after a lengthy break, led home the outgoing Champ of Josh Brooker in Clubman Super Heavy.

Victorian Lee Mitchener was the only driver to retain his number one plate triumphant for the second year running in the Leopard Heavy class.