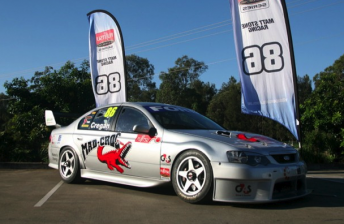 The team will campaign the remaining six rounds of the FV8 Series with support from energy drinks company Mad Croc, G4S and Ethos Energy.

Mad Croc will feature on the bonnet and doors of the Stone Brothers Racing-built Falcon BF. The company supplies energy drinks, gum and chews.

After making a consistent debut in the first round of the series at Adelaide’s street circuit, Cregan heads to this weekend’s round at Barbagallo Raceway in 12th place.

One major advantage that the V8 rookie will have is that the Barbagallo round will be the first time that the Fujitsu V8 Series has crossed the Nullarbour to compete.

The Fujitsu V8 Series teams will contest two 30 minute races over the course of the weekend.

Practice kicks off this Friday.