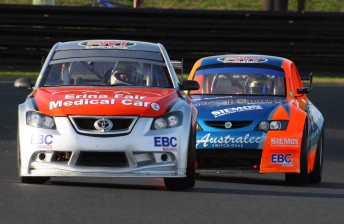 Peter Carr and Kyle Clews were the class of the Aussie Racing Car field all weekend (PIC: Mark Walker)

Five race and two regularity categories wrapped up their respective weekends at Mount Panorama for the Bathurst Motor Festival.

The biggest race of the day was the Production Sports Car one-hour enduro, won by Andrew Miedecke and Jamie Augustine in their Daytona Coupe.

The victory wasn’t without its challenges, though, with Augustine forced to serve a drive-through penalty early in the race after jumping the start.

Huglin, who turns 75 next Friday, was especially pleased to finish second after his $450,000 car was punted into the barriers on Saturday in an expensive incident.

Peter Lucas teamed with Garth Walden to finish fourth in a Lotus Exige to make it four brands in the top four, with Andrew Macpherson and local driver Mike Reedy finishing fifth in their similar car.

The second round of the Commodore Cup series also wrapped up their weekend with an another two-driver race, today’s 14-lapper won convincingly by Geoff Emery and Steve Owen – despite starting from the back of the field.

They held of Marcus Zukanovic and Gerard McLeod in the race – but it was Ross McGregor and young Newcastle driver Drew Russell who combined to win the round – thanks to their victory yesterday.

Peter Carr continued his domination of the Aussie Racing Cars class this weekend, but was beaten in the third race held this morning.

A reverse top 10 affair, Kyle Clews and Carr charged through the pack to run first and second at the end of the race but the man that dominated the opening two wasn’t able to catch Clews in front.

Carr retuned serve in the finale to win weekend overall in convincing fashion.

Luke Ellery rebounded from a disappointing start to the weekend by winning the third and final Formula Ford race, as the category showed why it’s been missed from Mountain racing for the last eight years.

Victorian Rob Storey won the weekend overall thanks to his two brilliant victories in Races 1 and 2, with Greg Woodrow, Brett Francis and Ryan Campbell finishing in the top five overall.

Storey jumped to an early lead in today’s final race but Ellery was steadily working his way up from fifth place – moving to third on lap three before passing two cars to take the lead he’d never lose the next lap.

Shaun Jamieson continued on his merry way to win the Ashley Cooper 2011 Saloon Car challenge, sweeping both races today comfortably – as well as the overall weekend thanks to four wins from four starts.

Matt Lovell finished second overall for the weekend with Simon Tabinor third in his Commodore.

Alex Veryinis continued his strong weekend in the New South Wales Road Racing Club’s final regularity session today, again scoring the lowest out of the 30 cars that took to the track.

Chris Kingsland (BMW) and Gerard Skelley (BMW) both finished just a handful of points behind the HSV driver as the regularity fields enjoyed their first chance to take the Mountain this weekend.

The Porsche Club of NSW held two sessions today, Phil Treloar (Porsche 996) continuing his good form by scoring the lowest number of penalty points out of any regularity session (just 24) this morning. Long-time Porsche competitor Geoff Morgan was on top in the second session of the day.