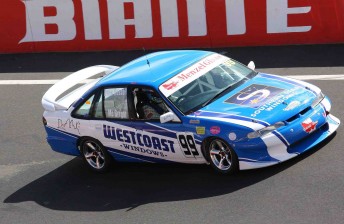 A thrilling Commodore Cup two-driver race has highlighted the first day of competition at the Bathurst Motor Festival at Mount Panorama today.

Russell and first-time Bathurst racer Matt Hayes fought for the lead that saw several tense moments. A five-car battle for the win had been led by the Marcus Zukanovic/Gerard McLeod VS, before the latter spun in the final corner with a handful of laps to go in an incident that opened up the race.

In one swoop, Russell charged from sixth to second before racing Hayes side-by-side across the top of the Mountain and into the Esses. In a place where it’s rare to see cars side-by-side, Russell was forced to take to the run off area before rejoining the fight. 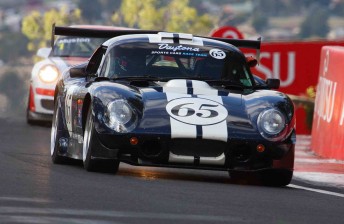 Though the Hayes/D’Agostin team questioned the finishing order post-race, results stand with the McGregor/Russell team classified first at the end of a thrilling encounter with their race rivals in second.

The first Formula Ford races on Mount Panorama in eight years produced their fair share of drama, including the remarkable sight of the first and second-placed cars in Race 1 pulling into the paddock thinking their race was finished – one lap before it actually was!

Greg Woodrow punched the air with delight on lap six having crossed the line ahead of Luke Ellery – but both promptly turned off to exit the circuit as the rest of the field flew past as there was actually one lap to go.

That result left Rob Storey in the race lead to hold off Brett Francis and V8 racer Tom Tweedie’s 1986 Lola for third. Storey backed up that result with a win in the second, but it was a charge from the back of the field from Woodrow and Ellery that provided the highlights, carving their way through to finish third and fourth, respectively.

There were two, 30-minute Production Sports Car races contested today, one for each driver nominated for tomorrow’s massive two-driver, one-hour Endurance race that is set to be a highlight of the event.

Rod Wilson took his brand-new Corvette Z06 GT3 to its maiden victory in Race 1, holding off Jamie Augustine in the rapid Daytona Coupe and Iain Pretty in his stunning Ford GT40 replica.

Race 2 saw the Daytona go one better – Andrew Miedecke leading home a charging pack of lightweight Lotus’ Elise racers headed by Simon Scuffham. Meanwhile, one of the drives’ of the event went to Garth Walden, who carved his was through from the back of the field to finish third in 10 laps.

The day wasn’t without its share of drama, however, with both Lamborghinis, driven by Ross Zampatti and Ted Huglin respectively, taken out in hefty crashes at the top of Mount Panorama.

Shaun Jamieson continued his winning ways in the Ashley Cooper Saloon Car Challenge, taking out Race 2. Queenslander Matt Lovell and Victorian Simon Tabinor finished second and third, respectively, but it was Jamieson who was the class of the field.

Peter Carr continued to teach the field a lesson in the Aussie Racing Car Super Series second round, winning both races today – though the field is getting closer to the dominating driver as the weekend goes on.

Carr won the first race by just one second over Tyler Owen and Simon Smith, while Owen got to within 0.2s of Carr in Race 2 – setting up the prospect of a competitive finale’ tomorrow.

Alex Veryinis and David Petrikas shared the honours in the NSW Road Racing Club regularity sessions, while Colin Duck in his Porsche 996 GT3 closed out a tight field in the second Porsche Club NSW regularity – five competitors covered by less than 20 penalty points

Action concludes tomorrow at the Bathurst Motor Festival with final races and sessions from each class, including the second 45-minute Commodore Cup mini-enduro and the major one-hour Production Sports Car enduro race in the afternoon.