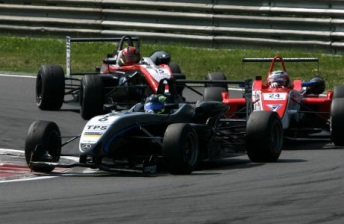 Australian international hope Scott Pye is remaining optimistic of his chances in the British Formula 3 International Series this year, despite a difficult opening round at Monza.

Pye failed to finish a race inside the top 10 after being caught up in three incidents during the three races.

Regardless, the 2010 British Formula Ford Champion is keeping his head held high and is confident of a better showing at the next round at Oulton Park this weekend.

“It was a good learning experience and am confident we will be battling for wins before long as we have shown we have the pace in testing,” Pye said.

“Monza is very much about getting the slipstream from another car to make a fast lap and in qualifying this is make or break.

“Unfortunately I did not get one and this made the entire weekend very difficult.”

The next round of the Cooper Tires British Formula 3 International Series will be held at Oulton Park this weekend, the same circuit where Pye posted the fastest time in official testing.