Ross Stone: Perth will be our real test

Ross Stone: Perth will be our real test 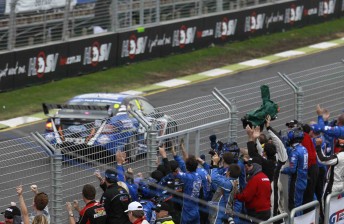 Ross Stone says that Perth will be the best indicator as to whether his team is a V8 championship contender or one race wonder.

Stone, who took Shane van Gisbergen to his first V8 Supercars win last weekend at Hamilton, says that the 21-year-old’s win at his home track was a great boost to the team, but to be considered genuine contenders, the top results must keep coming.

“Perth will be a good test for us, because we haven’t been particularly strong there,” he told Speedcafe.com.

“We’re not getting carried away, but it was very satisfying for Shane to finally win a race, and for the team to win a race. It has been a little while. We’ve been close, but not good enough.

“Hopefully, from now on, he can kick on, but we need to keep our head down, do all the hard work and do all the little things right.”

The Trading Post Perth Challenge will be held next weekend at Barbagallo Raceway.

For a detailed chat with Ross Stone about van Gisbergen’s first win, the clash between his other two drivers Alex Davison and Tim Slade, plus the future of Davison at SBR CLICK HERE