Young rally star Molly Taylor is about to head into a busy fortnight on the gravel tracks of Europe.

Taylor and fellow Australian co-driver Rebecca Smart take on the third round of the British Rally Championship to tackle on April 29-30, before they board a plane to Italy on May 1, to prepare for the next event in the World Rally Championship.

The duo is one of 20 crews contesting the WRC Academy, and one of six crews awarded a fully-funded scholarship for the year, which also includes Victorian Brendan Reeves. The 20 WRC Academy competitors all drive identical Ford Fiesta R2s prepared by World Rally Championship specialists, M-Sport, with a Pirelli control tyre. Taylor will drive the same type of Fiesta in the British event.

“I’m looking forward to the British rally (the Pirelli International) because I really like the stages and I had a good run there last year,” Molly says.

“Given the mechanical dramas we’ve had in the first two rounds of this year’s series, we are certainly hoping for a better result this time. Getting some extra miles under our belts, and some good times, would make us both very happy!

“It’s also handy that rally headquarters at Carlisle is only about 50km from home (Cockermouth, in Cumbria), because we must dash for London Airport as soon as we finish. We’ll go home, grab our bags and hit the road.”

Taylor’s mother – four-time Australian Rally Champion co-driver, Coral Taylor – is flying over to be ‘team manager’ for the two rallies, taking on the logistics and organisational role to relieve the pressure on the crew. She’ll also be on hand to celebrate her daughter’s 23rd birthday, which falls during the Italian event.

“Mum’s my birthday present and it’s a pretty good one!” said Taylor. 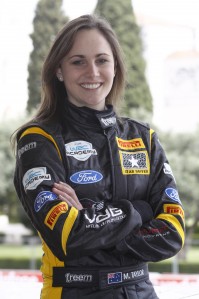 “But it’s not much fun for her, because she’s drawn the short straw to do the six-hour overnight drive from Cockermouth to London, so Bec and I can get some sleep on the way. Then we’ll all hop on the plane and see what sort of adventures we have over there.

“I really don’t know much about Sardinia as an event, except that it is sandy and very rough with longer stage loops than we had in Portugal. We only have one remote service during the day, and that’s just 15 minutes, so we have to play it fairly cautiously. We still don’t know if the Academy will let us carry any extra spare parts, so it is going to be all about driving smart.”

Taylor is upbeat after the Portuguese opener, when they posted some very quick stage times. Despite some damage to the car after a light rollover on Day One, the crew still managed to finish eighth in the Academy field, and are aiming to improve their times and their results this time around.

“Having Portugal behind us makes this much easier,” said Taylor.

“It was a baptism of fire, but we knew it would be. Now we know what to expect, so I think I’m much more relaxed heading into the event. We both are. Hopefully that means we can achieve what we want to achieve. Getting better is always the goal.”

Italy returns to the World Rally Championship after a one-year gap with the Mediterranean island of Sardinia again playing host to all the action. Rally d’Italia Sardegna kicks off on Thursday, May 5, with a ceremonial start on the waterfront at the port town of Olbia, which is also home to the permanent service park and headquarters.

There are three full days of competition (May 6-8) but the Academy field will contest just two days. They spend the third day with their Academy tutors, reviewing their performance in readiness for the next round.