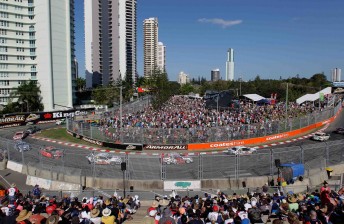 A host of drivers with Formula One credentials appear set to compete on the Gold Coast this October as part of the second-running of the Armor All Gold Coast 600.

Speedcafe.com can reveal that Alex Wurz has joined the extensive list of former F1 drivers to compete in the international-flavoured V8 Supercars race at Surfers Paradise.

Speedcafe.com understands that Wurz has been earmarked to make his V8 debut with Mother Energy Racing’s Jonathon Webb.

Wurz, a veteran of 69 F1 Grand Prixs and two-time winner of the Le Mans 24 Hour, is currently a factory Peugeot sportscar driver.

Hispania Racing Formula One driver Luizzi is also being tipped as a starter in the unique event, partnering with Wilson Security Racing’s Tony D’Alberto.

With no clashing F1 race that weekend, Luizzi would become the first current F1 driver to compete in a V8 Supercar at the Gold Coast.

Bourdais, Magnussen and Salo have already been revealed by Speedcafe.com as drivers at Triple Eight, Paul Morris Motorsport and Ford Performance Racing respectively.

V8 Supercars teams will be permitted to officially reveal its international drivers next month.

V8 Supercars chief operating officer Shane Howard says that final list of drivers will be finalised within the month, but the selection of stars is mouthwatering.

“We’re going very well with the quality of the drivers and we’re not far from the drivers,” Howard told Speedcafe.com.

“There are more drivers wanting to race on the Gold Coast than we have spots. They’ll be a mix of high-profile drivers and some young highly-skilled drivers from all categories.”

At this stage, there are no plans for an official launch of the event.