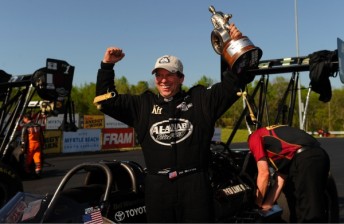 The event was the fourth of 22 races scheduled for the 2011 NHRA Full Throttle Drag Racing Series season.

Worsham nosed out Al-Anabi team mate Larry Dixon by four-thousandths of a second to take the win in Charlotte. 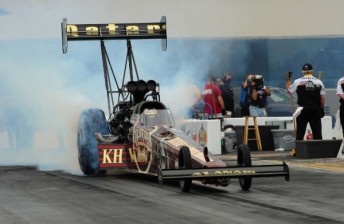 “I told [team manager] Alan [Johnson] it would be only a matter of inches … and it was,” said Worsham, who won for the second time this season and opened up a 77-point lead over Dixon in the Top Fuel points standings.

Australian racer Terry Sainty, who is competing in a number of NHRA events this year with the Sydney-based Rapisarda Racing, just missed out on the 16 car field, with his run of 4.039 seconds at 286.25 miles per hour seeing him 18th on the time sheets.

“Del talked about peaking too early. I’m not worried about that … I just want to peak,” said Beckman, who won for the first time in more than a year (Phoenix, 2010).

“I love this racetrack, and the best part of it is it’s home for me. Just a great, great day. I’m a very happy person,” said Anderson, who extended his NHRA-best streak of consecutive seasons with at least one win to 11.

Also of note for Anderson, who drives the Summit Racing Pontiac GXP, this was his 66th win, pulling him within one of Tony Schumacher  for fifth place on NHRA’s all-time-wins list in the NHRA Full Throttle Series and within three of Kenny Bernstein for fourth place.