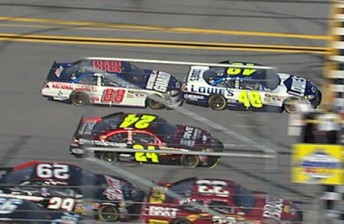 Johnson snatched victory from Bowyer on the line

Jimmie Johnson has come out on top in a record-equalling close finish to Talladega’s Aaron’s 499.

The Lowes Chevrolet driver beat Clint Bowyer to the win by 0.002s, mirroring the margin that Ricky Craven edged Kurt Busch by at Darlington in 2003 – NASCAR’s closest ever finish.

Johnson’s surge to the line was assisted by Hendrick team-mate Dale Earnhardt Jr, who took fourth behind Jeff Gordon. Kevin Harvick, who had been pushing his Richard Childress Racing team-mate Bowyer, was fifth.

Australian Marcos Ambrose was classified 32nd in his Richard Petty Motorsports Ford Fusion, after being involved in a wreck on Lap 90 – caused by an engine failure for David Regan.

Brad Keselowski, Kasey Kahne and Trevor Bayne were also involved in the wreck, while contact between Logano and team-mate Kyle Busch triggered another large incident 50 laps later, wiping out Busch and Matt Kenseth.

The results see Edwards take over the lead in the points standings after eighth races. CLICK HERE for the full standings.