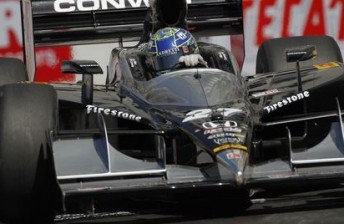 Conway charged after the final restart – the Andretti Autosport driver passing Ganassi’s Dario Franchitti and Penske’s Briscoe on consecutive laps to take the lead with 14 laps to go.

Briscoe followed Conway home in second, ahead of Franchitti, while Canadian James Hinchcliffe took a fine fourth in just his second IndyCar start.

Alex Tagliani made it five different teams in the top five by driving his Sam Schmidt Motorsports entry to fifth place, ahead of Hinchcliffe’s Newman/Haas Racing team-mate Oriol Servia.

Will Power came home tenth despite being spun out of third place by an out of control team-mate Helio Castroneves on a restart with 17 laps to go.

After 18th and 21st place finishes in the first two races of the season, Briscoe led a race-high 35 laps after a strategy call by team-owner Roger Penske, and ended the day relieved to get a solid result under his belt.

“It feels so good,” he said post-race.

“I mean, for a while I thought we were actually going to get the win today. But Conway was lightning fast, I really had nothing for him at the end on the restart.

“It’s an amazing day, an exciting weekend. We were P1 in the last two practice sessions, and then screwed up in qualifying, didn’t get a clear lap and ended up P12.

“I just thought,’ this championship is just never going to turn my way.’ But to get the lucky break with the caution today, another great call by Roger (Penske), we were able to lead a lot of laps today.

“It felt so good to be back up the front, getting a good result and being on the podium. It’s a huge confidence boost for all my crew guys as well. We just want to move forward from here now.”