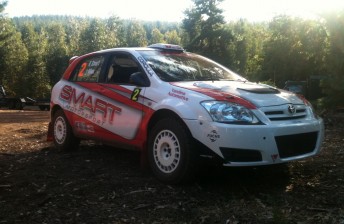 Smart driving a Toyota Corolla Sportivo turbo took victory in heat one by 32.4 seconds from Mitsubishi driver Mark Pedder in what was the dawn of a new era in Australian rallying, the first to be run under the new Unrestricted rules.

The 29-year-old mechanic from Yandina north of Brisbane showed strong pace throughout the ten stages of the opening heat, taking advantage of the fact that he was sixth car on the road with the drivers in front sweeping the loose gravel in the dry forests around Nannup.

“We’ve been flat out all day and the roads have been very slippery but we have been able to use that to grab a good lead and win the heat,” said Smart.

“The roads are well swept now so we might not have as big an advantage on day two but we can only see what happens and at the same time play it safe but be committed and stay out in front,” he added.

Smart with new co-driver John Allen raced clear of Mark Pedder taking fastest time on four of the ten special stages in a dominant display that signals the 2010 ARC runner-up’s intention to shoot for the title this year.

Pedder had no answer for Smart and at the lunch time service break conceded he would drive for a safe second place and the valuable points that come with it.

“Its been really, really slippery out there with all the gravel, I think for the first three cars it was very interesting to say the least,” said Mark Pedder.

“We had a few moments early on and nearly went off on the third corner of the event, so we decided to back it off just a little bit consolidate second position and   comeback and see what ewe can do on day two,” he added.

Early championship favourite Justin Dowell spent the day adjusting after breaking the racing spec gearbox in his Mitsubishi Evo 9 in the rally shakedown on Friday morning. The Victorian driver did not have a spare and was forced to use a lower spec gearbox and nurse the car through today’s stages. His persistence and application paid off with a third placing in the heat 14.4 seconds behind Pedder.

“I really spent the day adapting my driving style to the new gearbox and had a good battle with Mark but I am relatively happy, I wanted to stick with the top three and earn good points and that is what we did, so I will do much the same on Sunday,” said Justin Dowell.

Overnight leader Steven Shepheard had a wire come adrift costing him almost eight minutes losing him any chance of victory in his Mitsubishi Lancer Evo 10, finishing back in 15th place in what was a frustrating day for the Queenslander.

Eli Evans had a tough day in the two wheel drive Honda battling low grip to finish a fine fourth behind Dowell while admitting he played it conservatively.

“I know where I can make up time but we decided not to take any risks this early in the championship,” said Evans.

West Australian Leigh Hynes was fast in the opening stages but had an engine failure on the second test of the day and was forced out of the rally.