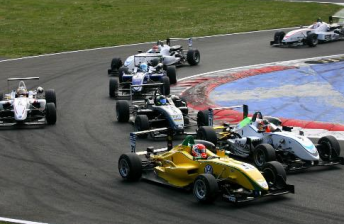 Scott Pye has crashed out of the opening round of the British F3 International Series at Monza today (Saturday).

The incident has put an immeditate dent in championship hopes.

The race, blighted by three Safety Car periods, was won by Felipe Nasr who snuck into the lead after the top two, Kevin Magnussen and Lucas Foresti, tangled while battling for the lead. Magnussen batted to the end with damage while Foresti took ninth place.

Once ahead, Nasr pulled away from Jazeman Jaafar and Carlos Huertas to make it a Carlin 1-2-3 at flagfall, but Huertas was level with his team-mate as they crossed the line, just 0.05s splitting them.

Pye was running in the top 10 when he tangled with Pietro Fantin and they both retired.

Two more races will be held at Monza on Sunday.