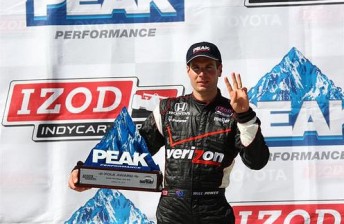 Three poles in a row for Will Power

Will Power remains unbeatable in qualifying in the 2011 Izod IndyCar Series – scoring his third consecutive pole position ahead of tomorrow’s Toyota Grand Prix of Long Beach.

Power has finished second and third at Long Beach over the last two seasons, and is predicting a challenging race.

“That was definitely a tough one,” said Power, of qualifying.

“I think Ryan had me there right till the end. I know how fast Hunter Reay is around here from the race last year. He’s bloody hard to beat.

“You know, it’s going to be a tough race, but qualifying the way we did I think we put ourselves in the best possible position.”