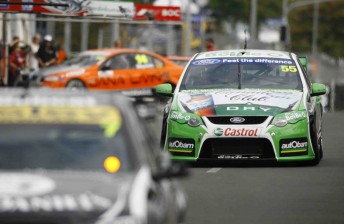 After heavy contact with the wall in yesterday’s qualifying session, Dumbrell was forced to sit on the sidelines due to substantial front-end damage to his car.

After close inspection by V8 Supercars’ category technical manager Frank Adamson, the car has been approved to be repaired at the track, ready for today’s qualifying session at 11am NZT.

Dumbrell suffered some bruising from the incident in his crutch and stomach, but says he should be OK to race.

“I had the strap go between my legs, and also the buckle bruising my intestines and stomach,” he told Speedcafe.com.

“It wasn’t the most enjoyable afternoon. It was pretty painful. I feel average, but we’ll see how it goes.”

Qualifying for Race 6 of the V8 Supercars Championship will be held at 11pm NZT followed by the race at 2.35pm NZT.