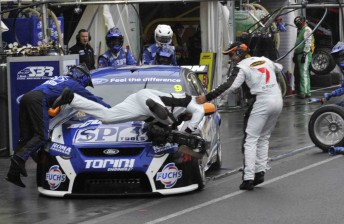 The slippery concrete surface in Hamilton’s street track’s pit lane is being blamed for a number of incidents during today’s fifth race of the V8 Supercars Championship.

The most shocking incident was when Shane van Gisbergen overshot his pit boom, collecting Network Seven’s cameraman David Lovell, plus his own mechanic.

Van Gisbergen wasn’t the only driver to overshoot his pit box. Podium finisher Craig Lowndes was a victim of the slippery surface, as was Toll Holden Racing Team’s Garth Tander. Tander actually hit his Number 1 machine Justin Burns, who has been taken to hospital with a suspected broken hand.

There was other drama in pit lane when Lee Holdsworth spun at the entry. The Fujitsu Racing driver is likely to receive a penalty for engaging reverse gear while trying to get out of the road of the traffic who has piled up in front of him. 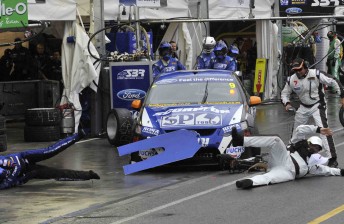 The aftermath: Lovell emerged uninjured from this incident

Kelly says that the wet concrete at Hamilton’s street track was almost impossible to drive on.

“I locked up instantly. That stuff is the most slipperiest stuff in the world,” he said.

“I was very lucky there. After I came out of pits, I saw on the big screen that a couple of guys had fenced it pretty heavily.”