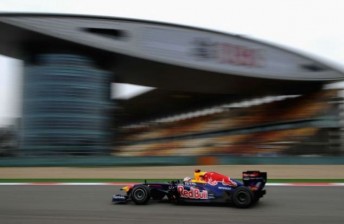 Qualifying for the Chinese Grand Prix provided mixed emotions for Red Bull Racing, with Sebastian Vettel storming to yet another pole position after team-mate Mark Webber was eliminated in Q1.

The Australian will start tomorrow’s race from 18th on the grid, after he was forced to run without KERS and kept on the harder compound Pirelli tyre.

Jenson Button pipped his McLaren team-mate Lewis Hamilton in Q3 and will start second tomorrow, while Nico Rosberg and Fernando Alonso rounded out the top five.

The Q3 session ended in somewhat of an anti-climax, as Vettel’s first run in the final 10 minute period proved far too good for the best that the McLaren drivers could offer.

There was drama in Q2, after Renault’s Vitaly Petrov stopped on the circuit with a mechnical issue, bringing out the red flags with just two minutes remaining.

The restart saw a swarm of drivers scrambling for track position for their last runs, with Nico Rosberg emerging from the pack to steal a Q3 place.

Ironically, Petrov’s issue hurt team-mate Nick Heidfeld the most, with the German having only planned one-run in the session – which proved too slow in the congestion.