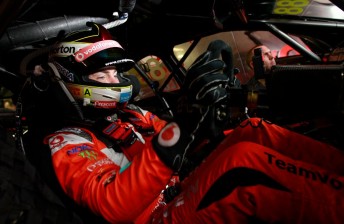 TeamVodafone has crushed its opponents at the end of the opening day of practice at the ITM400 Hamilton.

In a feat closely mirroring that of Red Bull Racing in Formula One, Craig Lowndes and Jamie Whincup streaked ahead of the field, taking the top two spots.

Paul Dumbrell (The Bottle-O Racing) finished fifth, but was one of a small number of drivers to taste a tyre barrier. The Falcon driver collected the tyres, damaging his car and putting it out of the session.

With light rain falling during some of the session, Dumbrell’s moment was the only one of concern.

Stratco Racing’s David Reynolds also had a drama, belching smoke thanks to a loose oil line.

See below for the results from the final practice session