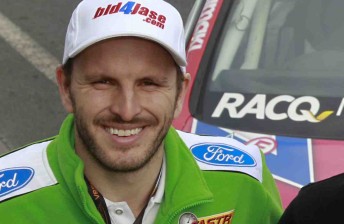 Paul Dumbrell has topped the times in the second ‘bottom 50 percent’ practice session ahead of this weekend’s ITM400 Hamilton.

The back straight chicane was modified for the session, with a tyre bundle introduced in the second part of the chicane. During the first practice session, the three sensor points were triggered nearly 70 times, with the second sensor begin hit 60 times.

In the second session, the amount of short cutting was down to 46.

Local hero Murphy was the most prolific short-cutter, tripping the beam seven times.

The real test will come in the final two sessions of today when all 28 cars hit the track at 2.15pm NZT.

A decision will be made at the end of the day to determine how or if the tyre bundles will be implemented over the weekend.