McLarens close on Vettel in Practice 2

McLarens close on Vettel in Practice 2 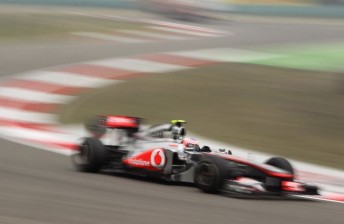 While Sebastian Vettel was again the man to chase in Practice 2 in Shanghai, the German topped the session by a much reduced margin compared to his morning efforts.

Having been more than two seconds adrift of Vettel in Practice 1, McLaren team-mates Lewis Hamilton and Jenson Button closed to within 0.3s of the reigning World Champion to take second and third respectively.

Four Mercedes powered cars ended the 90 minutes in the top five, with factory drivers Nico Rosberg and Michael Schumacher showing signs of improvement in their W02s.

Fernando Alonso was again outside the top 10, having lost considerable time with a hydraulic problem.

Mark Webber was 10th fastest after completing 33 laps, with his best effort 1.6s adrift of Vettel’s.

The third and final practice session will be held tomorrow ahead of qualifying.