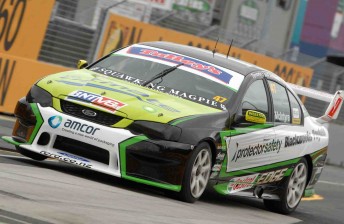 John McIntyre has secured pole position after the top 10 shootout for the New Zealand V8 Touring Cars on the streets of Hamilton this afternoon.

McIntyre, who will partner Shane van Gisbergen in this year’s V8 Supercars endurance races, was the quickest of the 23 competitors in his Talleys Falcon after provisional qualifying before sealing the deal with a 1m30.9702s lap in the shootout.

With this being the final round of the NZ V8 Championship, McIntyre sits third in points, 44 off the Championship lead. Current Championship leader Angus Fogg will start alongside McIntyre on the front row of the grid with Tim Edgell and Andy Knight on row two.

Practice pace-setter Kayne Scott will start down in fifth after the top 10.

Earlier in the day, Scott set the quickest time of the two practice sessions. Scott is racing under protest after recently being stripped of his Championship points following a cylinder head irregularity.

Championship second placed man, Craig Baird hasn’t had the run he is looking for thus far this weekend, recording the eighth quickest shootout time. Baird was lucky to even scrape into the top 10 after collecting the wall during qualifying.

Kiwi born Aussie racer Scott McLaughlin will start from rear of gri after a troubled qualifying session. Earlier in the day, McLaughlin had been showing solid pace aboard his Supercheap Auto supported Commodore.

The NZV8s will contest three races over the course of the weekend, supporting the ITM400 Hamilton.