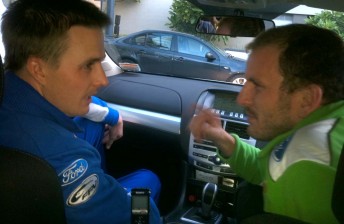 Being a leading V8 Supercars driver, and a new dad, can present challenges. But is it harder than getting grilled – on the record – by your own team-mate?

In a Speedcafe.com exclusive, Ford Performance Racing driver Mark Winterbottom, who racks up 100 starts at the ITM400 Hamilton this weekend, gets asked the hard questions by FPR stable-mate Paul Dumbrell.

Dumbrell, who has recently started hosting his own radio program with Rick Kelly, took charge of Speedcafe.com’s dictaphone and spoke with ‘Frosty’ about life at FPR, being a new dad and the introduction of new team-mate Will Davison.

The interview was conducted on a road trip from Auckland to Hamilton.

Winterbottom opens up on his new role as a driver/father, plus some secret tweaks that the FPR boys will trial this weekend in New Zealand.

For the complete transcript of Winterbottom and Dumbrell’s chat, exclusive to Speedcafe.com, CLICK HERE