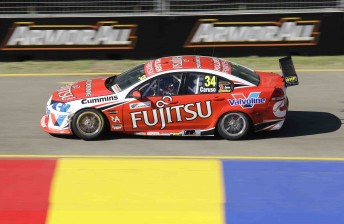 Garry Rogers Motorsport has officially confirmed Marcus Marshall as its fourth driver for the V8 Supercars endurance races at Phillip Island and Bathurst.

Marshall has never driven a V8 Supercar for GRM, but drove a Rogers-backed Van Diemen in the 2002 Formula Ford Championship.

It has not been confirmed whether Marshall will partner Holdsworth or Caruso.

Rogers says that it was important for him to secure Marshall as the team’s “fourth number one” driver.

“Our cars have proven to have the speed capable of winning these events and we need drivers with the necessary skills and mindset to drive as quickly as each other for every lap,” he said.

“Long gone are the days where you had No.1 and No. 2 drivers. Today you need four No.1’s to give you the best opportunity of victory.

“Marcus has not driven V8 Supercars for us before but an analysis of his lap times particularly at Bathurst and the fact that he has covered plenty of racing miles in various categories I see him as a very worthwhile addition for the GRM teams’ opportunity for success.

“On my discussion with him he seems to be a level headed person who is well aware of the commitment of each team member to achieve success.”

After driving for Dick Johnson Racing last year, Marshall says he is thrilled to have his 2011 deal locked in.

“I am excited to be joining the team. They are a professional group and have shown excellent car speed particularly in the last few seasons. I feel this is one of the best opportunities that I have had since early in my career to achieve a strong result at the endurance races”.

“With the speed that the cars have shown at Bathurst in previous years it was an easy decision to make. I would like to thank Garry and his sponsor group for the opportunity to join his team.”

Ritter and Marshall will both have the opportunity to test with the team at its next test day at Winton on May 10.

For more on the endurance line-ups, CLICK HERE for Speedcafe.com’s earlier story …