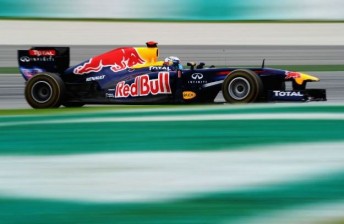 Red Bull Racing’s Sebastian Vettel has continued an impressive start to his title defence by winning the Malaysian Grand Prix.

Starting from pole position, the 23-year-old lost the race lead only in the pitstop cycles, and employed a three-stop strategy to beat home Jenson Button by 3.2s.

With forecast rain not eventuating, it was a straight-forward race for Vettel, who pulled a 10s lead in the opening 10 laps, before stopping for soft tyres on Laps 14 and 26, and completing a final 17 lap stint on the hard tyres.

Vettel’s only issue was a minor KERS scare, with the Red Bull team telling its driver not to use the device during the middle phase of the race.

Button had run third behind Vettel and team-mate Lewis Hamilton for much of the race, but moved into second place during the third pitstop cycle.

A KERS failure left Webber vulnerable off the grid, with the Australian dropping from third to 10th by the first corner.

Buried in the field, Webber switched to a four stop strategy that saw him chasing hard for the duration.

By contrast, Heidfeld had rocketed from sixth on the grid to second at the first corner, as he and team-mate Vitaly Petrov went around the outside of the squabbling McLarens and Ferraris.

Fernando Alonso lost a possible podium result  inside the last 10 laps – making contact with the rear of Lewis Hamilton as he attempted a pass into Turn 4. The Spaniard recovered to finish sixth – one place ahead of his McLaren rival.

Hamilton saw his chances of spraying champagne slip away in the closing stages, losing places to Heidfeld and Webber before pitting for a fourth time with just four laps remaining.

Adrian Sutil was just one position behind his Force Indian team-mate in 11th – recovering well after damaging his front-wing in the opening laps.

Vitaly Petrov’s day ended in spectacular fashion – with the Russian running off the circuit on the exit of Turn 11, hitting a drainage gulley at unabated speed and taking flight. The subsequent landing was hard enough to brake the steering column of the Renault.

Sebastien Buemi got the better of team-mate Jaime Alguersuari in an early race tussle but could only manage 13th after a pit-road speeding penalty.

The two Toro Rossos were chased home by Heikki Kovalainen’s Lotus – the Finn providing his team with a highly competitive showing on its adopted home ground.

Williams endured another double retirement, with both cars out before 25 laps had been run. Rubens Barrichello and Pastor Maldonado sported early race damage after being involved in seperate incidents – with the Brazilian forced to pit on the opening lap thanks to a puncture.

Barrichello eventually retired with a hydraulics failure, while the rookie was thwarted by a misfire.

HRT also failed to get a car home in its first race of the season, while hero of the Melbourne race, Sauber’s Sergio Perez, joined the F111s on the retirements list after his car was hit by debris.

Here are the race race highlights