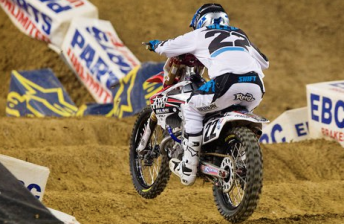 Reed was engulfed in a battle for second place with defending champion Ryan Dungey but unable to see the dislodged tough block, landed on it as he came over a jump on Lap 7 of the 20-lap ‘Main Event’.

The TwoTwo Motorsports/Bel-Ray Racing rider lost time and a position while freeing the obstacle from beneath his CRF450.

“I think it is easy to make excuses but the truth is I don’t believe I was riding at my full potential tonight,” Reed said.

“It seemed like I couldn’t get any front end feel for the bike but the fact is we have developed the bike around me and when I am not at my best, I am not getting the best from the bike.

“I know I sound like a broken record but it isn’t the biggest issue to me there is still a lot of racing and a week off to come. As we have seen this year, more so than ever before, things can change massively in a week.

“I know what I have to do from here and it is all up to me. It’s time to pull the trigger!” he stated.

The Monster Energy AMA Supercross, an FIM World Championship, heads to Seattle’s Qwest Field on April 18 before breaking for a week off over Easter.