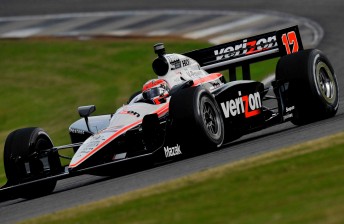 Will Power has taken another IndyCar pole

Australians have clean swept the front row of the IndyCar grid ahead of the Honda Indy Grand Prix of Alabama at Barber Motorsports Park.

Power says that his team will pay close attention to strategy.

“It was very tiring but we saved it until the end and put a good lap together,” he said.

“I’m happy to have the the #12 Verizon car up front again. It’s really important to start from the front at this track. I feel we should have won the race last year with the speed we had, so we’re pretty focused on the strategy.”

Briscoe was pleased to be the ‘best of the rest’ behind the dominant Power.

“Well, at least I was beaten by the guy who no one seems to be able to beat in qualifying,” he said.

“The car is feeling great this weekend; we really unloaded strong and we’ve been right up there in every practice session. Wish we could have gotten the pole, but we got the front row. It’s going to be a long race and I’m looking forward to it because I need to get some points back from St. Petersburg.”

Will Power talks about his pole position