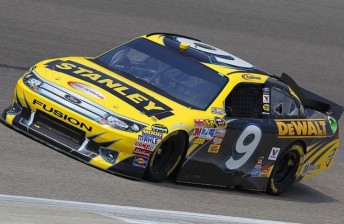 Ambrose put in a strong performance at TMS

The former V8 Supercars driver put in one of his most convincing oval track performances since joining the Sprint Cup in 2008 – running within the top 10 for the majority of the race.

The Richard Petty Motorsports Ford even challenged for the lead with just over 100 laps to go, and eventually led a lap during the penultimate round of green flag pitstops.

Ambrose emerged from the final pitstop cycle in seventh, and despite lacking the ultimate pace of the front-runners in the closing stages, picked up a position on the last lap thanks to an out-of-fuel Tony Stewart.

“I’m very proud of the Stanley boys for putting together this result, we’re starting to really click on these intermediate ovals,” said Ambrose.

“It’s great to be running out in the front of the pack, and it gives us a lot of confidence moving forward.

“Sadly we didn’t quite have the package together in that last run to challenge for the win, so we’ll learn from that.

“Talladega next week is another challenge all together, I can’t wait to get there.”

The performance sees Ambrose jump three positions to 19th in the Sprint Cup standings – 81 points outside of the top 12 Chase cut-off.