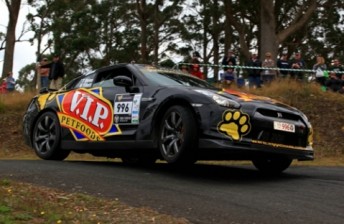 Queenslander Tony Quinn has maintained his advantage in the Modern competition of Targa Tasmania after an eventful penultimate day of the five-day tarmac classic.

Quinn and his Nissan GT-R now lead the event by nearly three minutes, although Subaru driver Dean Herridge is coming fast and is relishing the wet weather that crews faced on the run to Strahan on the west coast.

Mazda’s Brendan Reeves continues to dominate the Showroom class ahead of Mike Sinclair’s Skoda, and is sixth overall in the event.

Rex Broadbent has opened up a comfortable lead in the Classic Outright competition after overnight leader, Andrew Miedecke, misjudged a corner and spun his 1970 Ford Capri Perana into a ditch, taking him out of the event.

Day four took the Targa competitors from Launceston across to Ulverstone and then south-west to the overnight halt in Strahan. Fine weather prevailed early in the day, but torrential rain around Hellyer Gorge, Roseberry and Rinadeena really spiced things up.

Quinn was untroubled at the head of the pack, but a fierce battle for second place between Dean Herridge (Subaru) and Matt Close (Audi TT RS) soon saw some changes to the leaderboard.

Herridge attacked in wet conditions that he enjoys. Close tried to respond, but in doing so he put his Audi off the road and out of the event on the last stage of the day.

This left South Australian Matt Sims (Nissan GT-R) in third place, ahead of the Mitsubishi Lancer Evolution X of Dean Evans, while 2007 Targa winner, Tony Sullens, rounds out the top five in his Subaru.

“We’ve put our better tyres on the back, but the front of the car is not behaving itself,” Quinn said.

“We’re just plugging through as some of the conditions have been atrocious.

“We’ve been aquaplaning and there’s not much I can do. Dean is coming through fast and I think his tyres are medium compound, which are the ones to have for the wet, so he’ll be hoping the conditions continue.”

One of the big losers on day four was 2010 winner Jason White. After copping a 20 minute penalty on day two of the event, the Lamborghini driver’s crew had to change a rear differential overnight, but then his clutch faltered and has dropped back 26th place.

Reeves’s lead in the Showroom competition extended throughout the day, but the Mazda driver was also keeping a close eye on the outright times.

“This morning was dry and the car was working well, but we broke a sway bar link just before lunch in the Rhiana stage,” Reeves said.

“The boys fixed that during lunch, then this afternoon has been really wet through Hellyer Gorge and Roseberry. The car was been working really well for us, and we’ve pulled a lot of time on Broadbent, and we’re now up in the top 10 outright.”

Classic Outright leader, Andrew Miedecke, had built up a lead of nearly a minute after the first stage on day four, but he appeared to lose concentration after passing another crew who had crashed on the long Cethana stage.

Miedecke then dropped the rear wheels of his V8 Capri into the gravel and spun into a ditch. It was an unfortunate and unlucky end to the event for the veteran touring car driver.

Despite the rain, Rex Broadbent could then ease his pace and conserve his lead over David Cooper (Holden Torana A9X), who lost time with worn tyres on the wet Hellyer Gorge stage.

The final day of Targa Tasmania sees the event move from Strahan to the finish at Wrest Point in Hobart.

Far from being an easy run to the finish, the day includes the event’s longest stage, the iconic 58.55 kilometre Mt Arrowsmith test.