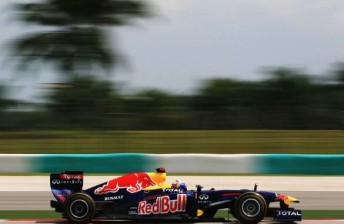 Sebastian Vettel took his second pole of the season

Sebastian Vettel and Red Bull Racing have snatched pole position away from a resurgent McLaren in Sepang.

The German was the last of the front-runners to complete his lap in Q3, and undercut Lewis Hamilton’s best effort by 0.1s.

Mark Webber will start third having failed to go quicker on his second Q3 run, while Jenson Button ended the session fourth.

Fernando Alonso, Nick Heidfeld, Felipe Massa, Vitaly Petrov, Nico Rosberg and Kamui Kobayashi filled the remainder of the top 10 – with all six drivers have completed just one run in Q3.

For the second consecutive race, Michael Schumacher narrowly missed out on making Q3, and will start 11th.

The Q2 session had seen Button and Hamilton signal themselves as genuine threats for pole position, beating the Red Bulls into the top two spots.

Earlier, Webber had been just two spots away failing to get out of Q1 in 15th place, thanks to Red Bull being the only team not to run a set of soft tyres.

The opening Q1 session had seen Williams rookie Pastor Maldonado eliminated, along with the usual suspects from Team Lotus, Virgin Racing and HRT.

The Spanish owned squad had cause for celebration however, after making it within the 107% qualification cut-off.

See below for the Qualifying result